Green Day announced today that they will premier a new single called ‘Here Comes The Shock’ at the NHL Outdoors at Lake Tahoe game in Nevada on Saturday. You may remember the band entered a two-year agreement with the NHL in 2019 to have songs from Father Of All Motherfuckers featured on the NHL’s Wednesday Night Hockey broadcasts.

LOUD season has returned. We’re stoked ‘Here Comes The Shock’ will soundtrack the NHL’s return to the outdoors!

What we don’t know yet is where the new song comes from. Is it a stand-alone single, a leftover song from the Father Of All sessions or perhaps something that will be featured on an upcoming album or EP? Either way, it’s great to have some new material on the way even if it does end up being a one-off. The song will be available in North America this Sunday (20th) and on all streaming services in the rest of the world on Monday (21st).

While we wait for that, check out Green Day’s performance at last year’s NHL All-Star game where they made headlines for dropping a few f-bombs. 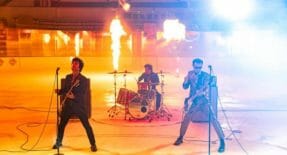 Green Day partners with the NHL