Police File presents Green Day’s most infamous moments, run-ins with law enforcement and general debauchery. It’s not always flattering but it all contributes to the history of the band. 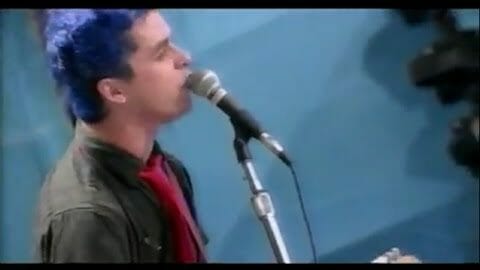 Leave it to Green Day to start the biggest mud fight in history at a festival meant to encourage peace. The over 350,000 fans watching the show were encouraged to throw mud after one fan did so and Billie picked it up and put it in his mouth.

Soon after, Billie began running across the stage while fans threw mud, and he attempted to fight back on his own, needless to say, he was a little outmatched.

Things began getting really out of control when fans began running on the stage, even Mike was mistaken for a fan and lost three teeth as bouncers tackled him. Billie described it best onstage when he yelled, “this isn’t peace it’s fucking anarchy”.

Billie later said, “Going into it I thought that the nostalgia reasons behind the show were kind of a joke. So we went in thinking ‘This is lame’. But then it turned into something completely unexpected. To tell you the truth, it was the closest thing to total chaos I’ve ever seen in my whole life.” 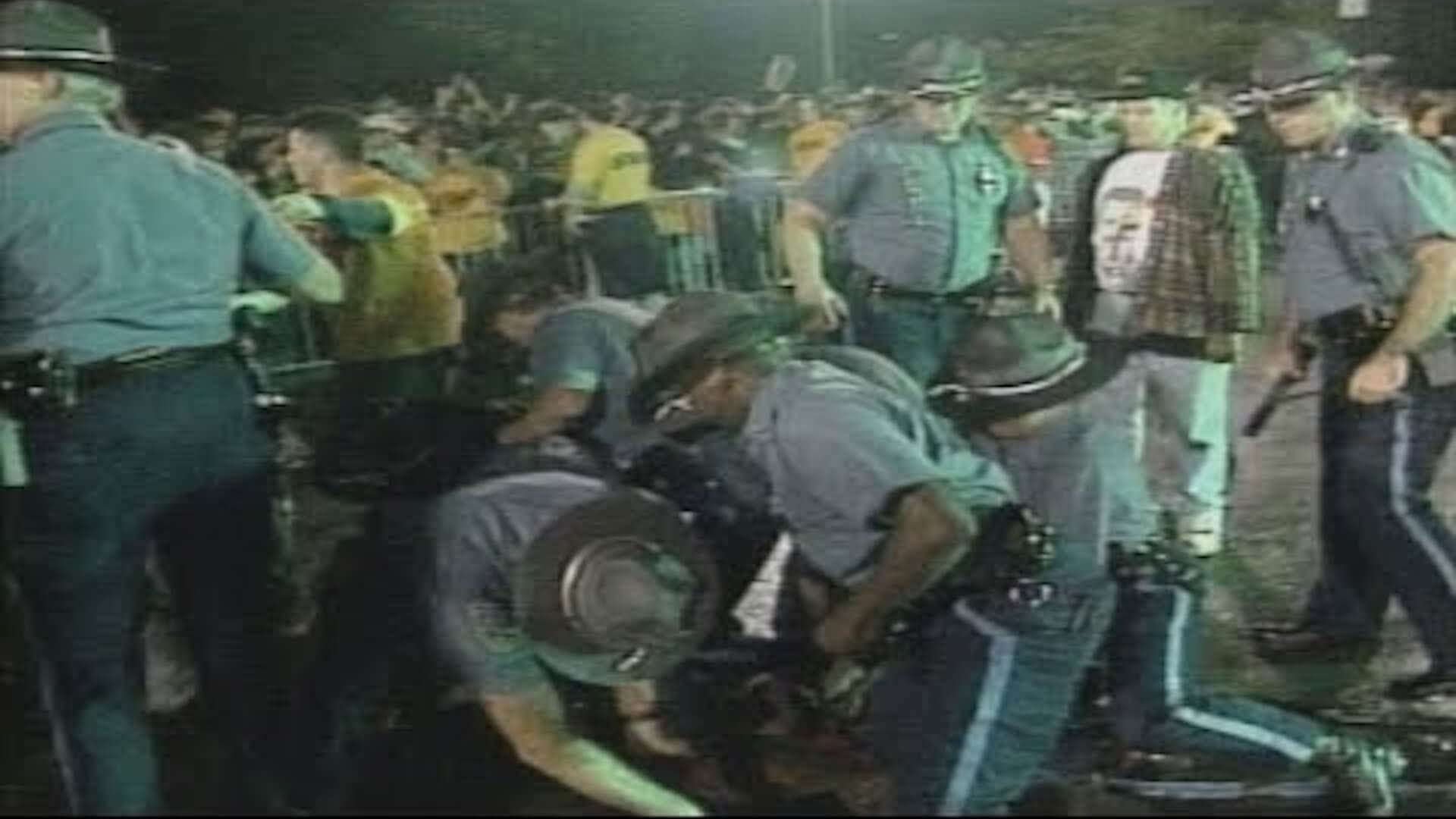 Less than a month after their infamous appearance at Woodstock, Green Day performed a free show arranged by local Boston radio station WFNX. A modest crowd was predicted by organizers but contrary to expectations an estimated 65,000 fans descended on the site.

The police and state troopers were out in force aided by a 15-man security team of inmates from the local prison. The crowd control was woefully inadequate and a few minutes after the band had taken the stage the crash barriers came down.

All hell broke loose. “The police were getting beat up and stuff,” said Tre. The lighting rig began to wobble and the promoter concerned the whole stage might fall, pulled the plug. The crowd went mad, causing havoc that quickly spread through the streets of downtown Boston.

The band were ushered under the building for their safety and watched the whole fiasco while the prisons begged for autographs. “The thing is”, noted Tre, “not one of them fucked off, they all went back to jail the next day!” 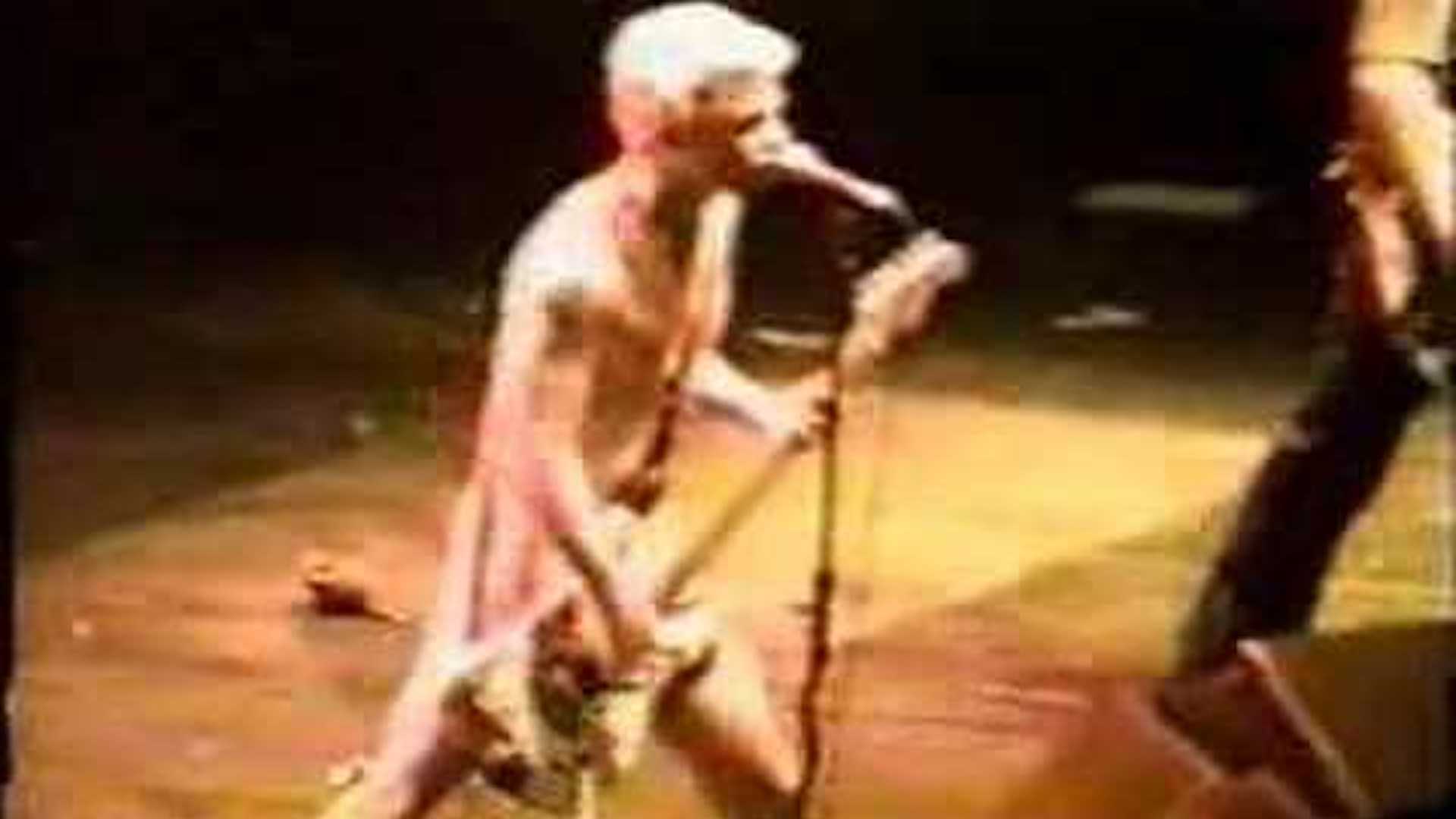 With the Z-100 Christmas show (AIDS benefit) beginning to drag after 7 hours, Green Day needed to be in top form to revive the tired audience. This was the final concert after a long year of supporting their hit album Dookie. At close to 2 AM the band finished their set and headed backstage before their encore. Fans would be in for a surprise when Billie returned to the stage wearing nothing but his guitar for a performance of ‘She’.

“His impulsive need to be noticed turned a musical endurance test into what will be one of the most talked about concerts of the year” reported the New York Post. 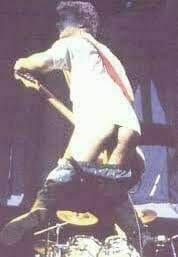 Billie was just trying to liven up the atmosphere during a concert in Milwaukee by mooning the crowd of 6,000 – but this did not go over well with local law enforcement.

Witnesses said Billie was arrested after exiting the building about a half hour after the band’s show. “He was getting into a car with a whole bunch of people when about seven police officers surrounded the car with lights and prevented him from leaving” a concert attendee recalled. Police officers took Billie to the Milwaukee police station, where he was cited for indecent exposure. After he paid the bail of $141.85, he was released.

Lt. Thomas Christopher of the Milwaukee PD explains what happened: “Mr. Armstrong dropped his pants to his knees and exposed his buttocks to the crowd. After the concert, Mr. Armstrong was taken into custody, given a city citation for indecent exposure. He posted a bail and was released. The problem was he exposed himself to a crowd of about 6,000 people,” said Lt. Christopher. “Including people as young as ten. That was our main reason for taking the action.”

“You can start a riot,” Billie Joe encouraged the crowd that gathered at New York City’s Tower Records for an in-store performance. “It’s your prerogative – you can do anything you want, cause you’re not at Tower Records, you’re at a Green Day concert!”.

During their 45 minute performance: Billie Joe spray-painted “Nimrod” in black and red on store walls, showered beer and water over CD racks, body surfed over the crowd to reach the window where he spray-painted “Fuck You” and then pulled down his pants to moon the crowds gathered outside.

A store manager then had to forcibly wrestle a 200-pound monitor away from Billie when he attempted to throw it over the staircase landing where the band played. Tre managed to hurtle a bass drum over the ledge. “The store couldn’t handle it,” a grinning Tre Cool said later. 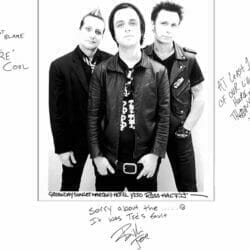 Shit Show At The Sunset Marquis

The infamous Sunset Marquis was in for a shock when Green Day stayed there. First, Mike kicked off the night by squatting over his hotel balcony and shitting on actress Juliette Binoche’s patio below. Binoche meanwhile was off picking up an Oscar at the Acadamy Awards. “It wasn’t me,” said Dirnt, “Ok, maybe it was me. But as they say, shit happens.” Tre remembers, “She was so pissed. She tried to get us thrown out of the place. But they let us stay…big mistake.”

Tre then nabbed the guest register from the reception area after he discovered the Rolling Stones were staying there and made a series of late-night calls to Keith Richards. Later that night, one of the band members (which one is a mystery, but my money is on Billie) walked down the hotel corridors knocking on people’s doors naked.

Billie later almost got into a fight with an unnamed 80’s pop star and they finally topped off the evening by throwing their TV out a third-story window. “Glass was everywhere, that’s all I can tell you,” said Billie, “you have to live that arrogant lifestyle now and again.” 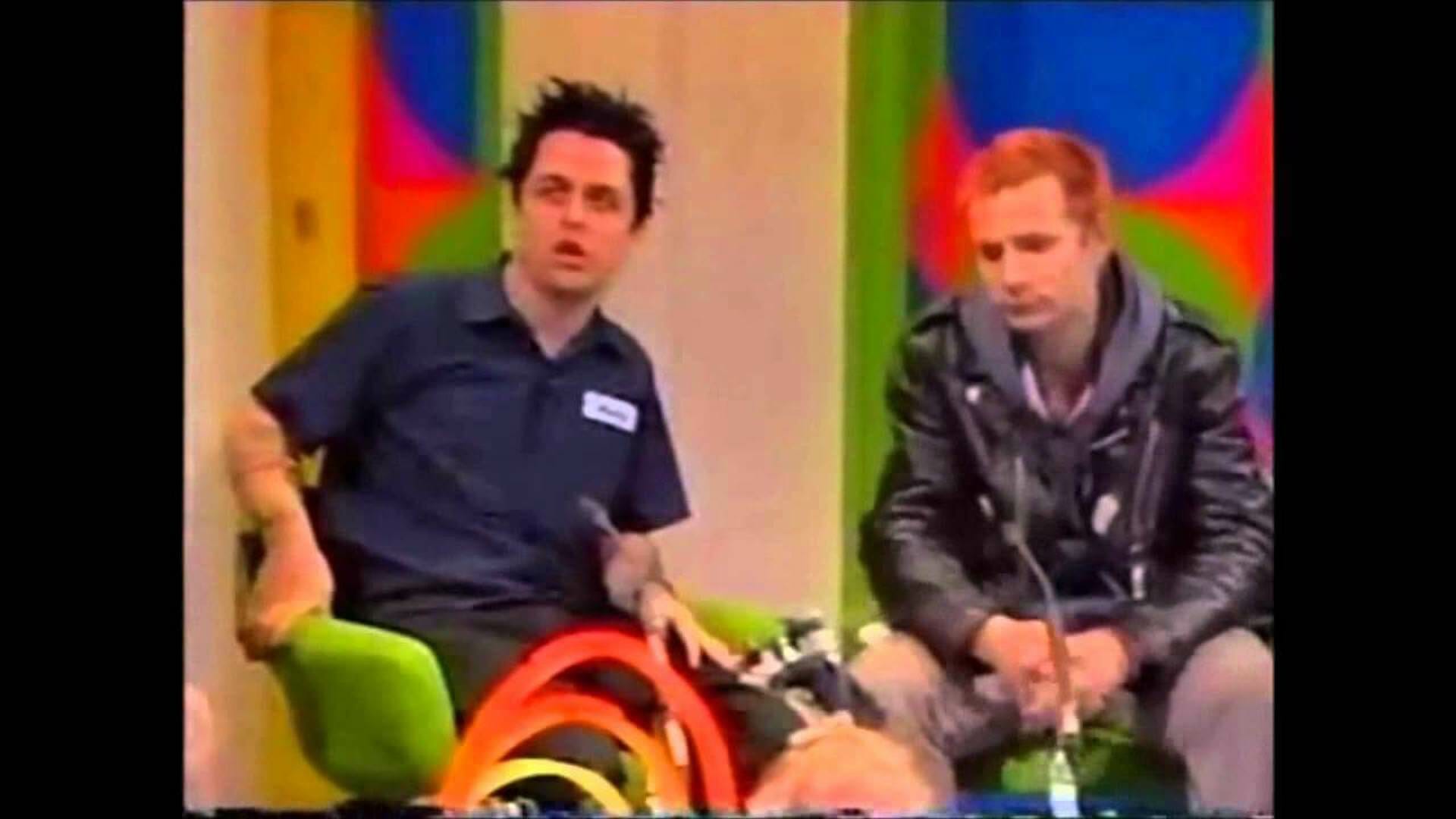 Green Day was escorted from an Australian TV studio when they spontaneously performed the track ‘The Grouch’ while appearing on the show Recovery TV. Anyone familiar with that particular number is well aware that its lyrical content (especially the chorus of “The world owes me, so fuck you”) makes for something less than family viewing.

On top of that, the band (who were not scheduled to perform on the show) hijacked instruments from the house band for the performance. After whipping the crowd into a decent lather, the band wrapped up its song and was promptly escorted out of the building by studio security.

Co-host Jane Gazzo later recounted the incident; “Six minutes into the interview and their drummer Tre Cool said ‘We want to play, you guys want us to play?’ And the live audience said ‘Yes!’ of course and before we knew it, they’d hijacked instruments off the house band and did a series of songs complete with swear words and everything on live TV.”

Naturally, everyone in the audience and those watching at home were loving it, but the network wasn’t as happy. “They almost got us thrown off the air!” Gazzo said. “Just to watch that unfold was spine-tingling and hair-raising and incredible to see.”

A fight between Arion Salazar of Third Eye Blind and Mike began after Green Day’s set as part of the KROQ Weenie Roast when Salazar ran onstage and bear-hugged Dirnt.

Mike, apparently surprised by Salazar, then allegedly kicked and hit Salazar leading to a scuffle onstage and later backstage after the show. Backstage, Mike was hit in the head by a beer bottle by either Salazar or a fan protecting him, causing a skull fracture.

In a statement released by Third Eye Blind’s management, Salazar said, “I am sorry that my attempt at doing something I thought would be funny escalated into Mike getting hurt. That was never my intention. I simply had too much to drink and made a very bad decision. If I had been in Mike’s place, I’m sure I would have acted similarly. My heart goes out to him and I hope he recovers quickly. We have many friends in common and I just hope that he can accept my sincerest apology. I am sorry, Mike.” No charges were ever laid in the matter. 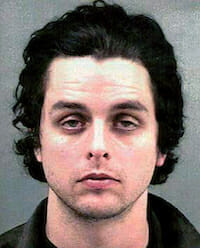 In a regrettable incident, Billie Joe was arrested and charged with driving under the influence while driving a BMW convertible near Telegraph Avenue in Berkeley, CA. He was stopped for speeding around 1am and failed a sobriety test. Billie was booked and released on $1,053 bail. A police spokesperson said the singer was “very cooperative” and did not inform authorities of his celebrity. 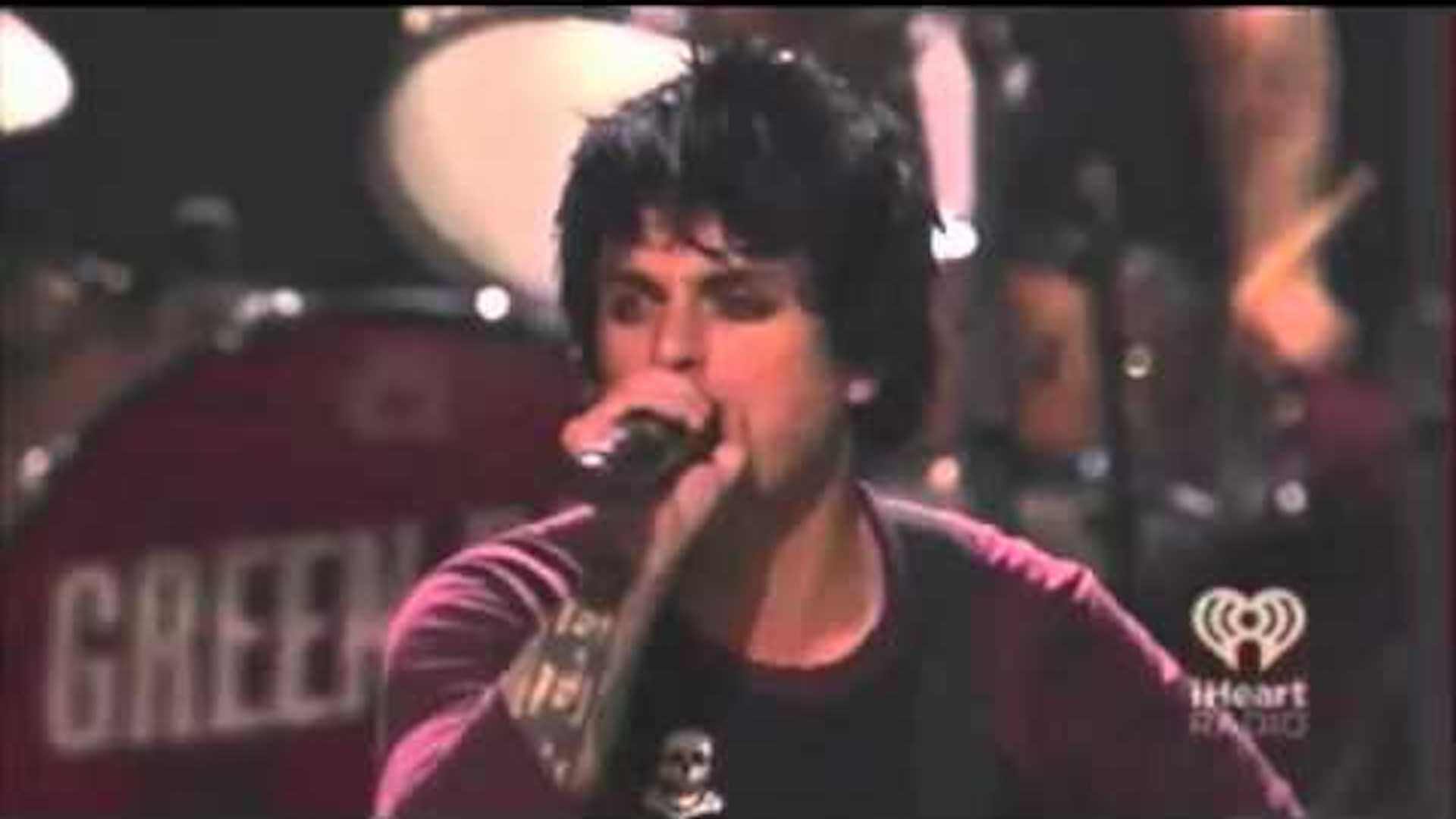 When he walked onstage blackout drunk at the iHeartRadio festival on September 21st, 2012, the week ¡Uno! came out, Armstrong brought it all crashing down. Confronted with a blinking sign warning the band its allotted time was ending, he flipped out, treating the crowd to a rant that would’ve been hilarious if he weren’t so far gone. “Fuck this shit!” he snarled. “I’ve been around since 19-fucking-88. And you’re gonna give me one fucking minute? I’m not fucking Justin Bieber, you motherfuckers. You gotta be fuckin’ joking.” He proceeded to smash his guitar, and Dirnt, in solidarity, trashed his bass too.

Armstrong’s dire state aside, the bandmates agree they probably shouldn’t have been at the pop-dominated fest in the first place. “Once a punk, always a punk, is really what it comes down to,” Armstrong says. “Sometimes you feel like that dirthead kid who for some reason is running for homecoming king,” he adds. “But we have to blame ourselves for putting ourselves in that situation. We have the ability to say no.” He pauses. “Honestly, dude, I can’t remember a word that came out of my mouth.”

Dirnt agreed with everything Armstrong said onstage. “But what I couldn’t agree with,” the bassist says, “was seeing the degradation of my friend. The fucking path had gone too far. And he didn’t even see it yet. It was, ‘We’re done. Recognize it. I can’t think about playing with you right now. You got to get right.’”

Armstrong entered rehab, and while he was away, Dirnt wrote him letters of encouragement tempered with blunt realism. “If we make it through this and we get back together,” he told him, “we’re either going to be stronger than ever or we’re going to not be doing this.” (Rolling Stone)