Green Day rang in the New Year a little early in 2019 with a November taped performance that was aired as part of Dick Clark’s New Year’s Rockin’ Eve broadcast. The band performed Dookie‘s ‘When I Come Around’ and the title track to their forthcoming album Father Of All Motherfuckers. If you missed their performance, the band posted both songs to their official YouTube channel today which you can watch below.

In a tweet from their official account announcing the live videos, Green Day seems to be hinting at a new single being released soon, saying “New year, new music coming sooner than you think”. The band have not released a proper radio single since they dropped ‘Father Of All…’ on September 10, 2019, alongside new singles from Hella Mega tourmates Fall Out Boy and Weezer but did release ‘Fire, Ready, Aim’ to be used as the theme song for NBC’s Wednesday Night Hockey as part of their partnership with the NHL.

In other news, Green Day singer Billie Joe Armstrong actually celebrated the New Year with friends and family at The Golden Bull in Oakland, CA playing a set with his side project, The Longshot. The sold-out show was filmed in its entirety and shared by Todd Pritchard which you can enjoy below. 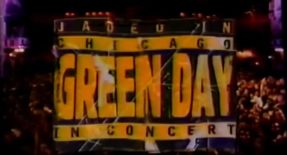