Green Day fan Todd Pritchard has spent years collecting and surfacing rare and unreleased songs, demos, and live performances – many of which can be found in our Audio Archive.

Today we got a special treat from Todd in the form of a live Green Day performance at 924 Gilman back on February 4, 1989, when the band was still called Sweet Children. Green Day’s show that day is notable for featuring three original songs that were never released. Two of the tracks, ‘Stay’ and ‘You Can’t Fool Me’ have surfaced previously but the third song, ‘When Your Near’, has never been made publicly available until today.

Pritchard uploaded the song late last night to his YouTube channel along with a separate video featuring the other tracks mentioned above along with additional live performances of the song often referred to as ‘Future Old Boy’ (actual title unknown) and ‘Maybe Forever’, both of which had been previously surfaced.

Huge thanks to Todd for continuing to find and release this rare content for fans! Check out both videos below and then head over to our Unreleased Songs page if you want to hear more rare Green Day music. 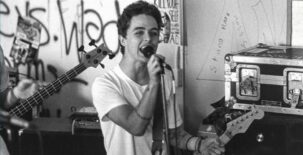 Listen now: Words I Might Have Ate (home demo)