It’s been a while since we’ve had any Green Day news to pass along as we wait for the Hella Mega tour to kick off in just a few weeks, but fans and collectors will be happy to hear they have something they can pre-order today. Starting off with the long awaited….

Yes, after years of speculation and fans wondering why seemingly every band and celebrity has a Funko Pop except Green Day, they have been finally announced.

The American Idiot themed Funko pops can be pre-ordered individually for $8.99 USD or you can grab the whole set for $24.99. As for when you’ll get them, it may be a bit of a wait. According to Big Apple Collectors, it will be a minimum of 60 days but likely closer to 90 days or longer before the Green Day funkos will actually be available.

Also announced today from the Green Day owned Oakland Coffee company comes a new limited edition 7″ vinyl featuring live recordings of ‘2000 Light Years Away’ and ‘She’ from the bands performance in 1994 on the BBC. The platinum white vinyl is available only to Oakland Coffee club subscribers so if you aren’t subscribed already, you’ll have to do so in order to pick the record up.

It looks like this won’t be the only vinyl from this session to be released as the album cover indicates it’s Part 1 of an unknown number of releases. Aside from the aformentioned songs on this release, the band also performed ‘Basket Case’, ‘When I Come Around’, ‘One Of My Lies’ and ‘Armatage Shanks’ at the session which means they can section it off into a three part series of 7″ vinyls with 2 songs on each.

Head over to Oakland Coffee to check out the subscription options if you want to get your pre-order in. The vinyl is expected to ship the week of July 19, 2021 and there is a limit of one per subscriber. 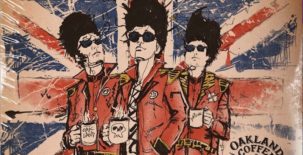