Performers were announced today for Global Citizen Live this September and Green Day will be taking the stage among a star-studded lineup. The annual event is billed as “a 24-hour global event to unite the world to defend the planet and defeat poverty”.

Billie Eilish, Coldplay, Ed Sheeran, Metallica, Lorde, and The Weeknd are just a few of the other artists that will be performing across the world at venues in Lagos, London, Paris, Los Angeles, New York, Rio, Seoul, and Sydney. Tickets for each of the concerts will be available in August, keep an eye on the Global Citizen website for further details on those.

It has not yet been announced which artists will be performing where, but the entire event will be available to watch live on a variety of platforms including ABC, BBC, Hulu, YouTube, and Twitter on September 25th.

Green Day previously played at the 2017 Global Citizen Live event in New York City. Check out their performances of ‘Boulevard Of Broken Dreams’, ‘American Idiot’, and ‘Basket Case’ below. 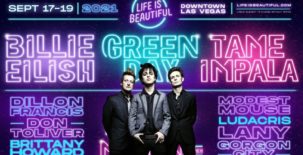