A fan attending a recent concert at the Golden Bull, a bar co-owned by Billie Joe Armstrong, took to Facebook to report that he not only met the Green Day frontman but also received some inside info from him that the band had recently recorded 6 songs in the UK for an upcoming EP.

A couple of days later, Billie Joe posted a throwback picture from the bands Sweet Children days with the caption “Next album cover?”.

While those two things happening within days of each other could be seen as coincidence, a new post to Green Day’s social media seems to be confirming that the band not only recorded in the UK as the Facebook user reported, but are also taking a nostalgic look back with the text of “1972” in the video which is the year all of the band members were born in.

The video shows the band at RAK Studios in London while an audio clip of a new Green Day song plays in the background and abruptly ends in just 18 seconds.

With each band member turning 50 in 2022, the “1972” in the video could refer to either the featured song clip or the title of the rumoured EP but it seems to clearly indicate the band are going to celebrate this monumental moment in their lives with new music.

We’ll keep you posted on every new development of this story and you can keep tabs on all the previous news and rumours on our Album 14 page.

Billie Joe also added to his Instagram story that he will be performing on “Miley’s New Year’s Eve” on NBC. The show kicks off at 10:30 pm ET on December 31st. The host of that special, Miley Cyrus, will also return the favour and open for Green Day at the Super Bowl Music Festival on February 12th at the Staples Center.

UPDATE (Dec 30): Due to a close contact COVID exposure, Billie Joe has decided not to perform on Miley’s New Year’s Eve out of an abundance of caution. Billie has tested negative for COVID. 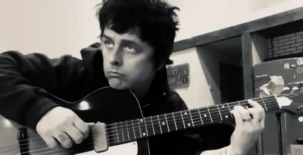