Green Day had a surprise gift for fans today with the release of a music video for ‘Youngblood’ from their 2016 album Revolution Radio. Captioned “Merry Xmas 2018!”, the video features live performance and backstage footage from the RevRad tour.

This isn’t the first time the band has released a Christmas video, in 2015 they surprised fans with an original song for the holidays called ‘Xmas Time Of The Year‘.

‘Father Of All…’ music video released 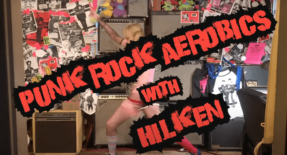