Green Day took the stage last night at the 2019 Video Game Awards and as with their appearance at the American Music Awards, the band played homage to the 25th anniversary of Dookie. While the AMA appearance saw the band perform Dookie’s ‘Basket Case’ this time they went with ‘Welcome To Paradise’ along with ‘Father Of All Motherfuckers’, the first single from their upcoming album. You can check out the bands’ performances of both tracks below.

That wasn’t the only news from the night though, it was also announced that six tracks from Green Day’s catalogue will be released as DLC for the VR game Beat Saber. The songs included are; Minority, American Idiot, Boulevard Of Broken Dreams, Holiday, Father Of All Motherfuckers and Fire, Ready, Aim. The tracks were made available for purchase following last night’s award show for $8.99. 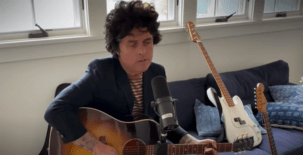 Watch: Billie performs ‘Wake Me Up…’ on COVID benefit