Father Of All Motherfuckers, the lead single and title track from Green Day’s upcoming album, has continued to perform well in the three weeks it’s been on the Billboard Rock Charts. The latest charts released earlier today show the band making gains on every chart they rank with the exception of Rock Airplay where they continued strongly at #2. Father Of All has it’s first #1 after nabbing the top spot on the Canada Rock chart knocking The Black Keys’ “Go” down to #2. 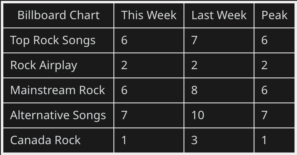 In other news, it was announced today that Green Day have been nominated for an MTV EMA award in the Best Rock category. The band will compete against The 1975, Panic! At The Disco, Liam Gallagher and Imagine Dragons for the award. Head over to the EMA website now to cast your vote. The 26th edition of the award show will take place in Seville, Spain on November 3, 2019.