Oakland Coffee has announced the release of Part 2 of Green Day’s 1994 BBC Sessions on 7″ purple vinyl. The latest edition features the bands’ performances of ‘Basket Case’ and ‘When I Come Around’. The previously released Part 1 featured ‘2000 Light Years Away’ and ‘She’ on platinum white vinyl.

While Oakland Coffee hasn’t yet confirmed they will be releasing a Part 3, Green Day did perform six songs during the BBC session so a third and final 7″ in the series would most likely include their performances of ‘One Of My Lies’ and ‘Armatage Shanks’.

The deep purple 7” (chosen personally by the World’s Most Dangerous Drummer, Mr. Tre Cool) comes with live recordings of “Basket Case” & “When I Come Around” that have never been officially pressed before!

The new 7″ is available to Oakland Coffee subscribers now for $19.99 US or if you missed the first 7″ and are not currently a subscriber you can also get Part 1 and Part 2 with a new subscription bundle for $79.99. 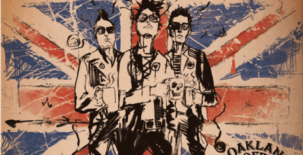